Phobos, potato-shaped moon of Mars, not a spaceship

In 2010, Richard C. Hoagland, the man most known for popularizing the "Face on Mars" through his book The Monuments of Mars: A City on the Edge of Forever (note the Star Trek episode reference), produced a two-part essay (paper) called "For the World is Hollow ... and I Have Touched the Sky!" (read Part I here and Part II here) on his website Enterprise Mission asserting that Phobos, one of the moons of Mars, is a spaceship. In fact, Mr. Hoagland asserts that it is a tetrahedral spaceship (more on this later), which would show that those Martians were just obsessive about making structures that hint at hyperdimensional physics (at least in Mr. Hoagland's mind)! Just to demonstrate this is not made up, Mr. Hoagland says in Part II, "Phobos is, also--an ancient 'tetrahedral spaceship!'" (emphasis his) :)

Anyone who follows Richard Hoagland's career and different claims should be aware that this sort of thing is Mr. Hoagland's stock-in-trade. Mr. Hoagland claims that lots of different phenomena in the solar system have extraterrestrial technology/structures. The moon has glass domes, Mars has its tetrahedral pyramids/mounds/structures, "The Face" exists (or more recently an obviously artificial structure). Try to set this aside as the evidence regarding Phobos is presented. Phobos is not the Earth's Moon and it is not Cydonia (the region of Mars with "The Face"), so even if Mr. Hoagland is wrong about those, it does not mean he is necessarily wrong about Phobos. But I'm pretty sure he is wrong on all counts. :D

The potato that orbits Mars


When the makers of Star Wars were creating the second movie, The Empire Strikes Back, the Industrial Light and Magic (ILM) used potatoes for some of the asteroids in the movie (article on making of The Empire Strikes Back). One of the main theories of the origin of Phobos is that it was an asteroid that is captured by Mars. It just happens to be true that Phobos has a striking resemblance to something we are familiar with: a potato.

If you notice from above, Mr. Hoagland plays a little hot potato (pun intended) in his claim about Phobos. He states that the asteroid Steins is shaped like a "classic diamond" (read: tetrahedral geometry) and that Phobos sort of resembles Steins (hence, it is a tetrahedral spaceship). As it turns out, Steins does look a lot like a diamond, (ESA site on Steins) although jumping from that to the assertion that it is a "spaceship" is a "big leap" for any man (again, pun intended). :D

Here is a picture of Phobos, where you can see its potato-like shape: 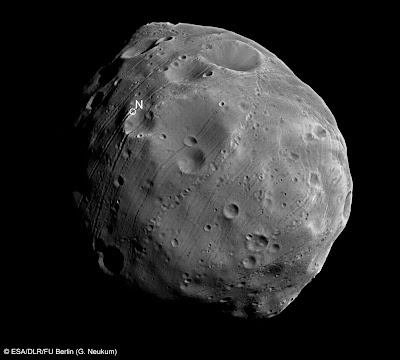 I'm pretty sure you'll agree it looks more like a potato than a tetrahedral shape, as stated by Mr. Hoagland. To me, there seems to be an optical illusion of "flat edges", which is mostly caused by the craters along the edge of this photo. And there's the fact that in at least one interview, Mr. Hoagland, himself, said that Phobos looks like a "lumpy potato" (interview on Rumor Mill News). In fact, when Buzz Aldrin recently commented on the "monolith" on Phobos, he called Phobos, "this little potato shaped object that goes around Mars once every seven hours." (article on Martian monolith)

Phobos is a groovy moon

In his usual breathless style, Mr. Richard C. Hoagland presents photos which he says show, "sculpted ... geometric ... multiply redundant(and meaningfully organized ...) DETAIL -- endless square miles of sheer, GEOMETRIC detail ... present all across this latest, stunning close-up Mars Express photograph of Phobos." Because I'm feeling generous, here's a photo which, while not being the one he presents, seems to show something similar: 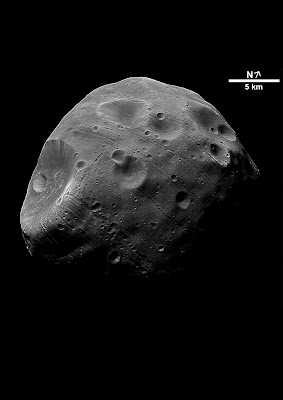 If we let our imagination get away from us, our mind might be processing a parallel image: the Death Star. This seems like a good example of Pareidolia, just like "The Face on Mars" (which later turned out to be a mesa). What we see are striations or "grooves" along the surface of Phobos. They look kind of parallel. Here's what Mr. Hoagland says he sees when he looks at Phobos:

"Detail composed over and over again of obvious 'right-angle layerings' of the remaining 'deck plating'(!); innumerable, geometric 3-D structures and 'openings' (NOT 'craters' ...) into the interior of this astonishing 'moon'; and, the obvious plan still exhibited by the almost endless examples of surviving surface engineering ... revealing a staggering, three-dimensional architecture--"

If you want to see the images he is referring to, you can see the second part of his essay or follow these links to photos: here and here. I don't see anything like he's talking about. If you look at some photos, your mind might conflate the image with a familiar one to science fiction fans: The Death Star. But look at this next image, which shows a lot of the same striations (grooves), but non-parallel: 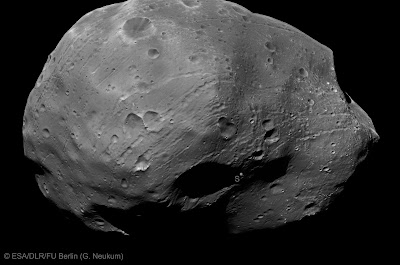 On this one, the "lines" along the surface are less parallel. I am not a scientist, so I'm not really able to talk about how these grooves form, but there does not seem to be much basis for talking about "deck plating" nor Mr. Hoagland's breathless statement: "You can almost 'count the rivits' [sic]". :)

The World Is Hollow and I Have Touched the Sky

For those Trekkies out there, Mr. Hoagland is talking straight to you. A rogue asteroid is in danger of colliding with a Federation planet and the U.S.S. Enterprise is dispatched to prevent it from wiping out all its inhabitants, except that the asteroid is also inhabited! What did Gene Roddenberry know and when did he know it? :D

As far as I am aware, the only finding so far about Phobos' structure is that it is about one-third empty (void). That means that two-thirds of the structure is solid material. ESA reports that there are "large voids" within Phobos, but that does not necessarily mean that there are rooms and corridors as you might expect from Star Trek vessels. It could just be naturally-occurring caverns. I do not know enough about how Phobos formed, although I am aware of the main theories, to come to conclusions. But "large voids" does not equal rooms and corridors inside an artificial Phobos spaceship.

When it comes to the monolith on Phobos, it looks odd, but I have seen some natural rock formations that look nearly as regular as the single rock on Phobos. Truthfully, nobody knows if it is a single rock, yet. It could be several. The photos available are not good enough to tell much of anything about it, except that, from what we see, it "looks" like it "might be" rectilinear. Where is Hoagland's usual "everything anomalous anywhere is a tetrahedron" assertion? Okay, that was unfair. :)

But the evidence is not really in on the "monolith" yet. Blurry or pixelated images do not help us very much. Here's an article about the monolith from the British tabloid The Daily Mail (photos are there).

Phobos is a moon, not a spaceship

Occam's razor is the principle generally used by scientists to determine what lines of inquiry are most useful. As Albert Einstein paraphrased it, "Make everything as simple as possible, but not simpler." There is nothing in the evidence that shouts out, "I do not fit; Phobos must be artificial!"
Posted by Unknown at 2:10 PM