The Face on Mars Farce

Sorry for the delay in this post. I am actually working on another post, which goes more into Richard C. Hoagland's HYPERDIMENSIONAL PHYSICS stuff, but I have gotten a bit bogged down in the minutia of its elements, so I will probably have to break up the subject into a few chunks. I was inspired by Dr. Stuart Robbins to go into my own views on The Face on Mars. Here it goes:
The Cydonia monument complex first came into the sites of indepedent researchers, including Richard C. Hoagland, NOT because of the many suspiciously building-like landforms (try none), but solely due to the so-called "Face on Mars". I considered not discussing The Face on Mars at all, but I realized that I have a few insights, even if I am not an astronomer, like Dr. Phil Plait (his blog) or Dr. Stuart Robbins (his blog and his podcast).
There are a few issues that I want to touch on about The Face: (a) the context of The Face in Cydonia (i.e., what is and isn't in Cydonia), (b) a few claims about The Face and (c) why I don't believe The Face is likely to be a construction.
The Cydonia Complex
As I pointed out in my previous post "Hoagland's Martian Missive", Mr. Richard C. Hoagland's mathematical relationship model of the Cydonia region is unconvincing because its landmarks seem entirely arbitrary and may sometimes be absent. I believe that the simplest explanation for this is that there is no "complex", per se, just a bunch of landforms that have come into existence through natural processes. :S 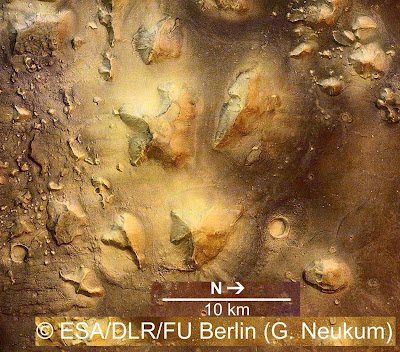 Photo: ESA/DLR/FU Berlin (G. Neukum)
As one can see from the area surrounding what Hoagland calls the D&M "pyramid", that feature is clearly not outside the norm for natural landforms in that region. This should be perfectly clear from the photo I presented in my previous post (which I re-present above). Just as an aside, does anybody see "Mr. Kitty" mesa? It's just to the right of my compass. See, I can find images that don't exist in the topography, too! :D
There are bound to be the occasional "interesting" geometric relationship between various landforms on a planet. What I would find more interesting and compelling is if there is a clear repeating pattern with regular geometry. What we see in the "Hoagland-Torun" model is a number of haphazard geometric relationships. There are two big problems with this, as far as I can see: (a) you can choose to include or exclude any landform that you want and (b) there are many angular relationships that are allowed. These both greatly increase your odds of hitting "something wonderful", in Hoagland's words. ;)
The Face or The Faces?
As I mentioned in my previous post, the idea of The Face has evolved somewhat over time for Mr. Hoagland. It used to be a human face, pure and simple and eerily reminiscent of the enigmatic face of the Sphinx in Egypt. Here is the famous "catbox" image of The Face. That will come in useful to Mr. Kitty. (Update: Expat points out the image is not the catbox. The joke stands. That's really the only reason I referred to the catbox anyway.) :D

Photo: NASA/JPL/Malin Space Science Systems (2001)
The Face has gotten a lot more problematic as an explanation for what the feature in Cydonia is. There is a big issue that The Face is not bilaterally symmetrical, which means that, if you were to construct two photos by mirroring the left and right side of The Face, respectively, the two photos would not look the same, whereas a human face would, more or less. :-)

Photo: NASA/JPL/Malin Space Science Systems (2001) [modified by me]
Richard C. Hoagland responded to this problem by moving the goalposts. Instead, he has pointed to artwork on Earth that depicts a "face" that is half man and half animal on the left and right sides an seems to suggest that is what The Face depicts. :0
The Face is NOT a face
I do not buy into the idea that The Face is a face, nor a construction. The Face does not look like a face, despite the early claims that there was an eyeball, a nostril, a tear, pupil, teeth (HT: Dr. Robbins). It escapes me why an advanced alien civilization (that is presumably human or extremely anthropomorphic) would produce a large-scale artwork representing a person (on at least half of The Face) and leave out the eyeball and made a very indistinct representation. One might say that there was considerable erosion, but I doubt it could wipe out all the detail on such a monumental-sized head. The same could go for the other side, whatever creature it represents. ;)
But I also find it difficult to accept that such a construction would be made on a desolate part of Mars without signs of a civilization surrounding it. There is nothing in the landscape surrounding the Face on Cydonia that screams, "I'm a building." The City, as Hoagland calls it, looks like it's a natural rock formation, as does the D&M pyramid. It seems odd to postulate an advanced society, even transient, that would use natural rock not only for monumental constructions, similar to Mt. Rushmore, but also for the housing that would be needed for any labor force that is based in Cydonia. And if you use the "maybe they lived on spacecraft" argument, one would have to wonder why they would go the the trouble of building The Face when Cydonia would have been little more than a temporary encampment.
Mr. Hoagland is fun
Whatever criticisms I may have of Mr. Richard C. Hoagland, he is interesting. I am usually interested in hearing him speak because he has at least a basic understanding of some science. He espouses plenty of strange ideas, himself, but occasionally is the voice of reason, compared with many interesting people who get involved with UFOs, conspiracies, etc. :D
I enjoy Mr. Hoagland's work, even as I find some of his evidence and hypotheses suspect. At the same time, there is a danger when people get taken in by any mistaken ideas. I urge anyone who follows conspiracies or "alternative" science (pseudoscience) to always be on guard and don't take the claims seriously. The chances of outlandish claims to be true are really quite low.
Posted by Unknown at 12:26 PM